Choose your way_eng.sub. from Martin Smekal on Vimeo.

2 Nights ago, we were with the September Wheels Team skating the Petit Desolée DIY in France. We had the luck to meet Martin Smékal, a Czech Film Maker. As the Swiss bowl scene and the Czech Bowl always had a nice and special connection, (withouth Martin Lucuk, there would be no Beast), it was suprising to me, to find out, that Martin Smékal made wonderful and tasteful documentary about Skateboarding.

The Movie tells the story of Ivo Prasek, one of the best Czech Bowl rider. He’s life and his up and downs. The movie continues his travel through Europe and has a nice part at the Black Cross Bowl. I had the honour to be with Ivo Prasek on tour 2 years ago on the Metal Hand /Mystic Tour in the Basque Country, and Ivo was ripping it so hard. He always waited at the smaller spots, he’s knee pads strapped on. But when he found a transition bigger then 9 feet, he was on fire and flying out the craziest Stalefishes I’ve ever seen.

The movie is half an hour and defintely the best thing you gonna see on the interweb the whole week. Take your time and enjoy it, it’s worth it! 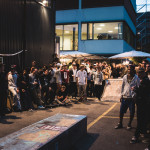