The Pablo Ribera Interview – Behind the Jaime Mateu Part

Ok, you all have seen the incredible Part of Jaime Mateu. This Part was filmed by Pablo Ribera, so let’s welcome everybody the man behind this awesome part! We did a little interview with him, to give you some more information about the part. And check his Youtube Channel for more Videos from the Basque Country.

1. Just present yourself: Where do you come from, how old are you…
Hi!! I´m Pablo Ribera, 30 y.o from Hondarribia, a little town in the Basque country.

2. How you got into filmmaking? Did you do any school or studies?
I studied graphics design but I was always filming my friends and I skating, so I have been filming for more than 11 years. I have been skating since I have 10 y.o

3. The Lords of Malasrampas was one of your first bigger clips. Can you tell us the story of Malasrampas?
The LOBR was my third large video, I made The DAB video, then Minuito Dos, sketchy y oscuro and them LOBR. The first one was about friends and fun, the second one was a project with all the skating made at the night, and only street, and then the LOBR, a video only about trannies, bowls and ramps. Malasrampas is our DIY ramp in the countryside in our town. It made by us, a miniramp with an extasion and more than 8 meters of coping. The perfect place, our paradise. Pablo Ribera with a Crailslide on the extension of the wonderful Malasrampas DIY. Photo: Nicolas Buechi

4. How was filming with Jaime, do you know him for a long time?
I met Jaime in the summer of 2014, he is from Mallorca, but came to Basque country for a contest and he stay in a friends house (Aitor Perez aka TORSO) for some months, and them we started filming for a part. He have already almost all the ideas of the tricks in his mind, he is a maniac… I have never seen anybody eat shiit like that… and them make perfect the trick… Jaime its just and amazing skateboarder, and has a lot of history to make already. Also is a good guy, a little crazy but with big hearth And that’s his friend Hector Heredia with a nice FS Rock at the Malasrampas DIY. Photo: Nicolas Buechi

5. Whats the biggest difference in a project for Red Bull, in comparison to Sketchy & Obscuro
During the filming for the video of RB, we didn´y know yet that it would be posted in RB, so we were just filming and travelling alla around the Basque skateparks, seraching for NBD transfers and crazy concrete walls for Jimmy.. During skatechy y oscuro was more like street sessions, and all of them at the night, in the middel of it. It was more like filming for LOBR, because of the trannies and bowls etc..

6. Where are you skating, tell us a bit about your friends and your scene.
I usually skate in Hondarribia skatepark with Alvar, Ibon, Borja, Luisito, Julen and more and in Pagola skatepark with the Campbells, Fliustas, Diego Doural, Mikel Muguerza, Hector Heredia aka Chetos and many more and in my favourite spot, with all of them: MALASRAMPAS D.I.Y. Also I go street skating sometimes in Irun or San Sebastian…
and we also go to south france, Hossegor, Vielle, Labenne..etc etc
its a great scene, with little kids ripping like Aitor Kortabitarte or OG guys like Kevin Campbell. With girls like Erika Caballero and crazy friends like Chetos.. I love my scene, we are very different but we all love skateboarding
I personally a skate nerd
I love skating, I transform myself in a little kid everytime I went skateboarding
its my passion, my life And here is Pablo with a Madonna at the Malasrampas DIY. Photo: Nicolas Buechi

7. What are your projects for the future? Any plans and trips?
I have another Jaime´s part to release, there is a lot of footage here to share. Also I´m thinking about doing the DAB video 2, with street skating and the LOBR 2… another ONLY trannie vid…..For trips, I would like to make the most, but I don´t really have any in my mind.

8. Any Thanks and Greetings?
Thanks to you Nicolas for the oportunity, thanks to my dad and mom,and all my brothers and family. To my friends, la kuadrilla, all the patin boys. To Ibon, Alvar, Chetos and Torso, for been always there and with love to my girlfriend Clarita.
skate sketchy for fun!
D.A.B 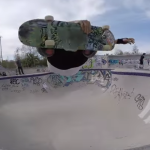